blog 90: In which I blatantly promote my new book!

I’m happy to say that I have a new YA book coming out in MAY.

It’s called THE PAIN, MY MOTHER, SIR TIFFY, CYBER BOY and ME and it will be launched at RIVERBEND BOOKS in Brisbane on TUESDAY MAY 3rd by my good friend and wonderful fellow writer Christine Bongers (Dust, Henry Hoey Hobson, Drongoes, Intruders).

Here’s a picture of Chris and me* with two people suffering the after effects of having read one of my previous books. 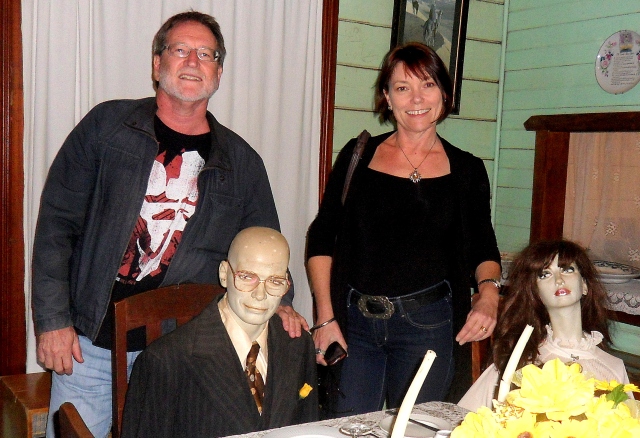 (*If you want to read a shocking, behind-the-scenes exposé of my adventures with Chris Bongers in outback Charleville, go HERE. Warning: Some images and attempts at humour might offend some readers.)

Basically The Pain etc and Me is the (humorous and at times serious) story of the narrator – 15 year old Maggie Butt – who is trying to get her life back on track after the upheaval and disasters caused by her parents’ divorce a few years previously. In order to do this she has set herself three specific goals to achieve in Year Ten before she heads off to a new senior school. The goals are 1. Make at least one good friend 2. Find a partner for the Year Ten Graduation Dance and 3. Reclaim her lost A grade in English. But with only around two months of the school year now left, Maggie appears doomed to fail on all fronts. To make matters worse Maggie’s mum’s new boyfriend (christened The Pain) seems intent on single-handedly destroying any last flicker of hope Maggie might have had of success. The question is, ‘How will it all end?’.

Maybe some of the amazing and mind-blowing pre-release reviews that have been pouring in, will encourage you to at least try it.

They really are unbelievable.

If you only read one book this year make sure it’s Michael Gerard Bauer’s The Pain etc and Me. If you do, I guarantee it will be the best book you read all year! (Old York Times)

I just read Michael Gerard Bauer’s new book from cover to cover in one sitting ! I found that skipping all the pages in between made it go soooooo much faster. (The Nightly Planet)

If you loved Markus Zusak’s The Book Thief. Congratulations! You have very good taste in literature. (The Monthly Weekly)

As I read Michael Gerard Bauer’s The Pain etc and Me, the words just flew off the page!  I think it had something to do with the cheap ink they used in the printing. (The Tuesday Paper – friday’s edition.)

Once I started reading Michael Gerard Bauer’s new book, I couldn’t put it down! (Note to self: Clean hands more thoroughly next time after working with Super Glue.)  (The Sunday Harold)

Michael Gerard Bauer’s The Pain etc and Me stayed with me for a long time after I’d finished reading the final words. (See previous note re Super Glue.) (The Wally Street Journal)

Once in a while a book comes along that changes your life forever. For me, it was Michael Gerard Bauer’s new YA novel. It’s my own fault of course. I should never have been reading it while driving … (The Washingboard Post)

I laughed! I cried! I cheered for joy! Then, after the Football finished, I started reading Michael Gerard Bauer’s The Pain etc and Me. Review to follow. But I might just watch a replay of the Footy first. Or trim my toe nails. Or do something else. Anything. Else. (The Chicago Trombone)

When you read Michael Gerard Bauer’s novels you can’t help but think of writers like Hemingway, Vonnegut and Steinbeck. And how much better they were. Still, he tries and I suppose you have to give him some credit for that. (The Curious Mail)

Engrossing. Captivating. Uproarious. Enriching. Luminous. These are all words I found in my Thesaurus when what I really should have been doing is reading Michael Gerard Bauer’s new novel. My bad! – awful, terrible, dreadful, appalling, shocking, ghastly, horrific, dire. (The Mercury Poisoning)

And finally for those who like playing SPOT THE DIFFERENCE. How many changes can you see from the UNCORRECTED PROOF* cover on the left to the FINAL cover on the right. Apart from subtle changes of colour that is. Maybe about 9? 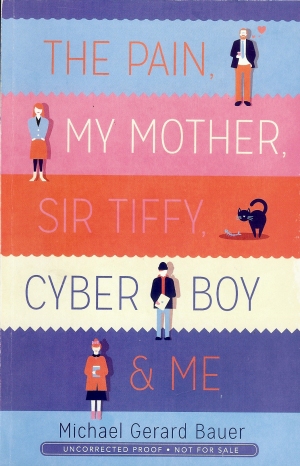 (*If you have happened to have read the Uncorrected Proof version, you might be interested to know that in the final version, the last chapter was quite substantially rewritten.)

That’s about it for now. I’d LOVE to see you at the launch if you are in the neighbourhood. 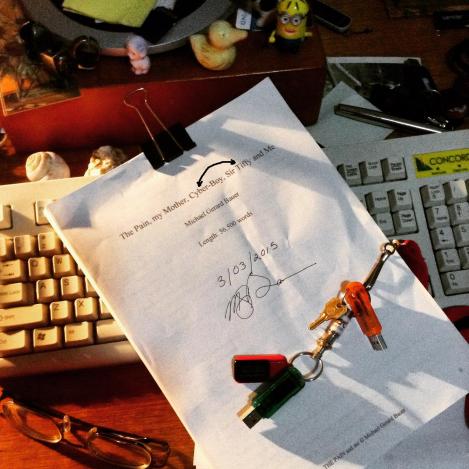 3 Responses to blog 90: In which I blatantly promote my new book!