I owe a great deal to Herman Melville – at least three books.

Page from Life magazine showing Gregory Peck as Ahab on the side of Moby Dick.

One day after I’d quit my job and was trying to write my first novel (a novel that I thought I’d never finish and even if I did, no one would ever publish it) the seed of another story was planted in my mind.

It was planted by this picture of Gregory Peck from the movie of Herman Melville’s classic novel Moby Dick. I liked the image. I’d torn it from a Life magazine and stuck it on the noticeboard beside where I wrote. It had been pinned there, along with a lot of other rubbish, for a number of years.

On this particularly day, I paused from my writing and stared vacantly at the image. I knew Moby Dick well. I really liked the book (although I can appreciate why many people don’t). I’d studied it at Uni and written an assignment on it so I knew a lot about it. As I looked at Ahab on the side of the Great White Whale, desperately trying to get his revenge, the novel’s opening line came into my head. It’s often listed as the most famous opening line in English literature. This simple three word sentence:

That day, for some reason, I imagined a boy, saying the opposite. Not confidently identifying and introducing himself like the narrator of Moby Dick, but whingeing or complaining about his name and pleading, ‘Don’t call me Ishmael!’

That little thought grew into a novel. Why? Because it made me curious. I wondered why this boy called Ishmael didn’t like his name. Then I wondered why his parents gave him that name. When I reasoned that perhaps they named him after the narrator of Moby Dick, I wondered why parents would do a crazy thing like that. And most importantly I wondered what sort of a boy he would be. In the end when I told his story, I gave him a characteristic I had at school – I was terrified of speaking in public.

During the writing I found there were other connections between my novel Don’t call me Ishmael! and Moby Dick besides just the opening line and the names of the narrators. Both books also shared a theme of Revenge. I thought I could emphasize that link by using quotes from Moby Dick to introduce each of the five parts that my story was divided into.

Moby Dick is quite a long book, but I was still surprised at the quotes I was able to find that perfectly reflected or closely tied into important elements within my story.

However the very last thing I expected to find in a melodramatic adventure tale about whaling was a quote relating to bullying in schools. But as I was re-reading Moby Dick one day, I came across these words:

I will not say as schoolboys do to bullies – Take someone of your own size; don’t pommel me! No, ye’ve knocked me down, and I am up again; but ye have run and hidden.

It was tailor-made perfectly for my story. I felt like I was channeling Herman Melville! Strangely enough I had a similar experience when I was using Einstein quotes throughout my novel Dinosaur Knights.  At one stage I was worried that maybe the idea of writing a story about future scientists discovering ‘time fossils’ and attempting to pull a carnivorous dinosaur for the past only to lose it in the Middle Ages, might be a little hard to swallow. Then as I was researching Einstein’s quotes on the nature of Time I came across this:

If at first the idea is not absurd, then there is no hope for it.

It seemed like Albert himself was giving me the nod to go ahead and write my book. So I did.

But my debt to Herman is even greater. His words and inspiration led to me write Dont Call Me Ishmael! which led on to a sequel Ishmael and the Return of the Dugongs and soon the third and final book of the series Ishmael and the Hoops of Steel will be making its appearance. It has been a huge joy and a blessing for me finding the characters of Ishmael and his friends and having the chance to tell their story and to share it with others. So thanks a lot Herman, you definitely rock.

Back in 2006 when DCM Ishmael! was launched (appropriately enough considering the sea-faring connection, on a floating restaurant in Sydney) I spoke about how much I owed Dyan Blacklock from Omnibus Books for publishing my very first novel and for making it possible for me to fulfil what I thought was an impossible dream of becoming a writer. I borrowed Herman Melville’s words on that day too. In Moby Dick he wrote:

All men live enveloped in whale-lines. 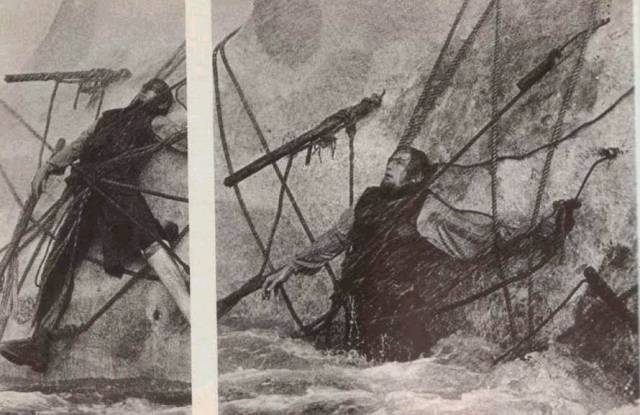 I could certainly relate to that. At the launch I finally got the opportunity to thank Dyan for cutting me free.