If you were a kid like me growing up in Australia in the 60s you would probably remember a very popular TV show from Japan called The Samurai which featured a samurai warrior named Shintaro Akikusa and his Iga Ninja side-kick Tombei the Mist.

Maybe like me and many others you too became obsessed with the show and loved Shintaro as your hero for the rest of your life.

If so, we are definitely soul mates, and this blog is mainly for you . 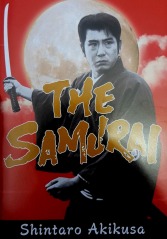 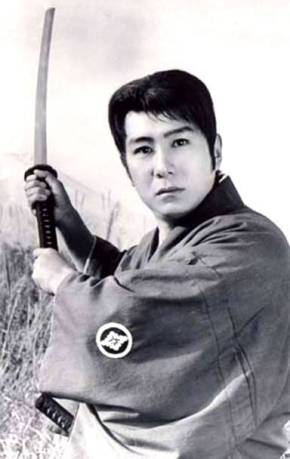 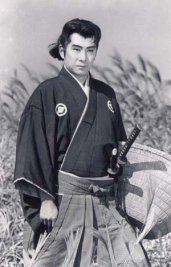 Why did The Samurai make such a huge impression back in the 60s? Why did so many people love it so much and have such fond memories of it?

Well firstly I think it was because we’d never seen anything like it. We were used to shows from America and heroes like Superman or Tarzan or the Cisco kid or any number of other cowboys, but nothing like the high-action adventure and excitement, and the strange, exotic nature of samurais and ninjas in 18th century Japan.

Everything was new. Everything was surprising. It was a show where any bent-over peasant hobbling down a country lane and hidden beneath a big lampshade-like hat, could suddenly transform into a deadly Fuma, Puppet or Koga ninja!

But as magical and surprising as the ninjas were with their strange weapons and ‘tricks’ and their flashing swords (and shuffling feet!) and the ability to leap backwards to great heights, the big attraction of the show for me (and I suspect most others) was the hero himself Shintaro Akikusa.

What I loved about Shintaro so much was his style, grace and poise. Even when he was in the heat of battle, fighting for his life against a dozen deadly ninjas, he remained like some kind of action-man ballet dancer – a master of his craft, always in control. He had no super powers to help him out, just his intelligence and the skill and expertise of his flashing blade.

And on top of that, he looked great! I mean, nobody had the daring fashion sense of Shintaro. Plus he had long flowing hair and a ponytail even before The Beatles! He was like no other hero I had ever seen.

I guess that’s why I liked him.

But I think why I loved him was because he was unerringly honourable, loyal, humble and true. He was a warrior who fought by a code of ethics and showed respect to all, even his defeated enemies. He was also a defender of the weak and the put upon. As a kid I think I realised that I could never be Shintaro, but I still wanted to be like him. That desire never really left me.

These days I do lots of talks in schools because I write for children and young adults and I often tell the groups I’m speaking to how when I was in primary school my first goal in life was to be a samurai. I also say that I knew I could never really be a samurai, so I had a back-up plan. That was to be a ninja. I show them images of Shintaro and Tombei the Mist.

It’s not surprising therefore that there are more than few samurai and ninja references sprinkled throughout my books.

For instance, in Ishmael and the Hoops of Steel the character Razz mentions that he’s a big fan of a band called Tranz Phat and their song Ninja Love. In that same book there’s this description of an unusual boy called Melvin Yip:

Not only did Melvin firmly believe that he was the best Volleyball player in the entire school, somehow he had managed to convince himself that he was descended from either a long line of Japanese Samurais or some secret society of Ninjas. This was despite the fact that the Yips actually came from Malaysia not Japan and that Melvin himself was born in Australia. Reality wasn’t exactly Melvin Yip’s strong suit.

All of that would have been perfectly fine except that Melvin liked to display his Ninja and Samurai moves on the volleyball court whenever possible. This meant that every now and then when the ball came his way, he would leap into the air, scream ‘Yeeee-aaaaaa!’ thrash his arms at it and then land back on the court where he would pose for a few seconds, crouching ninja-like before springing nimbly backwards into position. The rest of us meanwhile had to try to figure out where the ball had gone. It was hardly surprising therefore that Melvin Yip was known in Volleyball circles as the Psycho Samurai or the Nutcase Ninja. He wore both titles with great pride.

And there are other examples. The short story The Knitting Needle Ninja that I contributed to the anthology Rich and Rare below, is based on a real (and for my brother, an unfortunate) incident which resulted indirectly from my love of The Samurai as a boy.

In my younger readers’ book Derek ‘Danger’ Dale and The Case of the Really, Really Magnetic Magnet, Derek battles an evil group calling themselves the Notoriously Nasty but Nevertheless Nifty Ninjas. They are headed by a female commander named Cherry Blossom Lotus Flower Rosebud Tinkerbell the Merciless (aka Her Supreme Nastiness for short). (All following illustrations by my son Joe Bauer.) 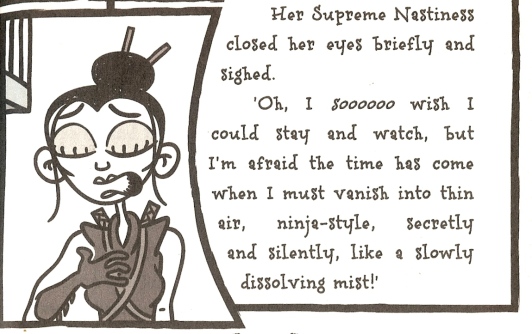 In the story Eric Vale Super Male when the main character Eric needed to have a favourite superhero, I created a half-ninja, half-nuclear-powered-robot called the Nuclear Ninjarator. 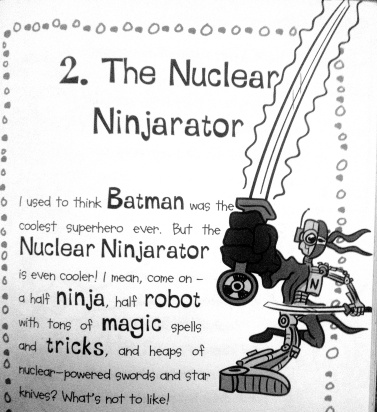 And because that whole story was all about superheroes and the nature of heroes, I dedicated the book to my own hero.

Then a year or so ago I joined the SAMURAI facebook group to seek out like-minded people who share my love of Shintaro and the show. It’s also been great sharing memories and memorabilia online.

Not long after joining the group I went to a meeting in Brisbane and got to see what has to be the Holy Grail for Samurai fans – the actual wig worn by actor Koichi Ose in the series!

It was given to Brisbane man Gary Renshaw who graciously brought it along and told me his incredible story of meeting ‘Shintaro’ in Tokyo and being gifted with the wig. (A Japanese TV show later came to Brisbane to film a segment on the group that eventually aired in Japan.)

Then, even more amazingly we found out that thanks to the huge efforts of another member David Lovegrove, ‘Shintaro’ (Koichi Ose) himself had heard of our fan club and had written us a letter of thanks.

To my dearest Australian fans of The Samurai,

It is really my great pleasure to know that you have a fan conference of The Samurai (Onmitsu Kenshi) today in Brisbane, Australia, even though a half century has already passed since the first airing of the program in Australia. I am deeply impressed.

I came to know that The Samurai was going to air in Australia when I was just preparing for The Samurai in Kyoto. After a while, the program gained popularity in Australia, so I was asked to visit Sydney and Melbourne. I remember very well that I entered the Sydney Airport in the costume of Akikusa Shintaro. I had changed my clothes in the air plane! If my memory is correct, I heard that the Beatles had also visited Sydney one week before my visit. If there had been more budget, I could have been able to take a lot more fellow actors and show real samurai and ninja to the Australian fans.

When I think back on my days of acting The Samurai (which is also the name of your Facebook club), I can recall hundreds of untold interesting stories. I can tell you at first that all the ninja’s paraphernalia needed a lot of work and time to prepare before shoot. At one time, there was a close-up of a shot when thrown stars and arrows struck near my face. They were thrown with piano wire, of course, not by someone’s actual hand. Honestly, I was very scared. They could have struck my face, you know, if something went wrong. I was terrified also when gunpowder exploded near my body.

It was the middle of winter when we went to the Izu Peninsula for a long shoot. Izu is a resort area near Tokyo and is famous for its hot springs. However, I had to be in the freezing waterfalls for a while. I could survive such a torture because I was young. I jumped into a hot spring after the shot and felt extremely comfortable.

I heard from Mr. David Lovegrove that there is the Shintaro wig at Mr. Greg Newman’s house today. There is nothing left in my hand that was used for The Samurai. I gave even a sword, katana, whensomeone asked me to have it as a present. When Mr. Gary Renshaw said he wanted to have something for his memory, I gave him my only and last wig. I am very glad he still keeps it. I am also very glad to hear that Ms. Nikki White has maintained a website for all The Samurai fans.

I have so many stories that I cannot tell them all at one time. I would love to tell you about them sometime when I meet you. I have a wish to visit Australia again before it becomes too late;-)

Thanks again to all of you.
With Love,

Well, I really thought it couldn’t get any better than that. But then we got the news that Koichi Ose himself was coming to Sydney and wanted to meet with his Samurai fans!

That meeting happened yesterday (Sunday 11th December) at the Rydges World Square Hotel for a limited audience of 30 dedicated and excited Shintaro devotees.

What a day! And what a beautiful, generous, gracious and humble man – just like the character he played 50 years ago. Just like you would want him to be.

We all got to hear Koich Ose answer questions about himself and the show (via a translator).

Then we had the opportunity to have individual photos taken with him and have memorabilia signed. 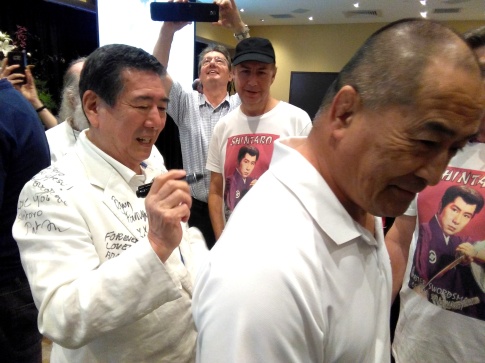 And we all got to sign the white coat he wore especially for the occasion! (see my name up there near the collar?)

During the afternoon Mr Ose was reunited briefly with his famous Samurai wig.

At the end of the meet and greet we all posed for a group photo and then it was finally time to say a sad goodbye to an absolute legend. 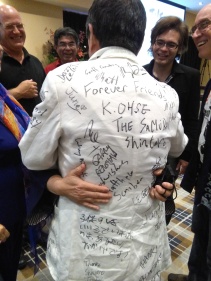 It was touching to see Koichi Ose so grateful to be remembered in the land Down Under after all these years and to see him so moved by the love shown to him in the room.

In the emotion of the moment, words failed him and we were left only with the beautiful tears of a Samurai.

No translation was necessary.

It’s not everyday you get to meet your hero. But yesterday I did.