blog 39: In which I take you on a photo tour of my recent trip to Adelaide.

Recently I was very fortunate to be invited to Adelaide for the CBCA Conference. My wife Adriana came too. We had a lovely time. Here is the photographic evidence …

Thanks to the generosity of the amazing folk of the Adelaide branch of the May Gibbs Children’s Literature Trust, Ard and I got to stay a few days in beautiful Norwood. (If you are a children’s writer or illustrator go here to see how you can apply for a residency at a May Gibbs apartment in Brisbane, Adelaide or Canberra.)

Norwood is so lovely. They have these incredible things called ‘seasons’ down south and depending on the ‘season’ the trees change in various ways. I reckon we should get something like that for Queensland. Our trees change too, but usually into housing developments. Apparently it helps to control the koalas.

On our first night we went to the Welcoming Ceremony at the Entertainment Centre. Ard took this photo of me with Norman Jorgensen (The Last Viking) and Ernie Tucker. I thought it was great how she managed to make my nose look even bigger. I don’t think those extra couple of drinks affected her at all. 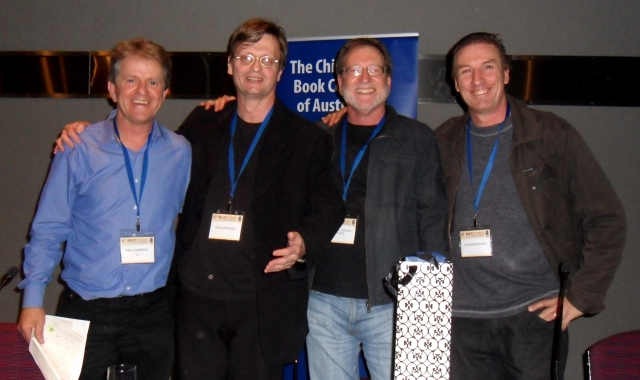 At the Conference I was honoured to be on a ‘Humour in Teen Fiction’ panel with these talented writers – Phil Cummings, Doug MacLeod and Don Henderson. Sort of the CBCA’s answer to One Direction.

On our day off we went to the Adelaide Zoo which was terrific. This statue outside is dedicated to one of the zoo’s original gorillas. What were they thinking? “How can we best represent the power and majesty of this magnificent creature? I know, let’s just do his pinkie!’ Still, it gives you some idea how enormous he must have been!!! Just imagine the size of the nail-clipper they would have had to use!

This is a monument to Nicolas Baudin. I think he was a zoologist who sailed with Matthew Flinders. Tragedy struck one day when he fell overboard and lost most of his body in a gruesome white-pointer attack. In a medical first they tried to save his life by replacing his missing body parts with a block of granite.

Here Ard mortally embarrasses a rare cockatoo by turning up in the same outfit. 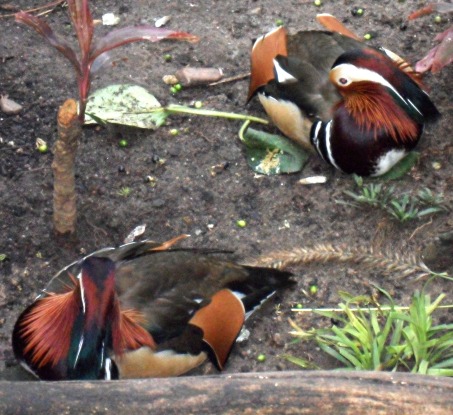 What I learnt from these guys was, “If you have to be a duck, at least be a classy duck!”

This fellow was particularly unhappy about being blinded by my camera flash. I really didn’t appreciate the negative look in his eye. I call him ‘Bad Karma Chameleon”.

This guy on the other hand looks far too relaxed. I think he’s making a mockery of being a zoo exhibit. Well all I’ve got to say to you pal is, “Bad boy, bad boy, whatcha iguana do? Whatcha iguana do when they come for you?” (Oh, stop your groaning! I’m doing the best I can with limited resources and grey matter.) 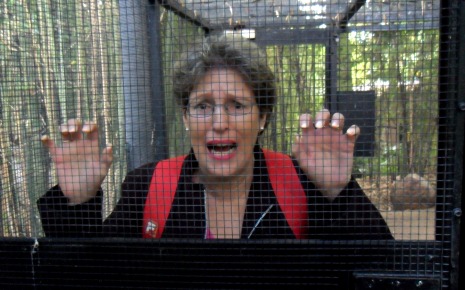 Of course they have nothing on Ard!!! 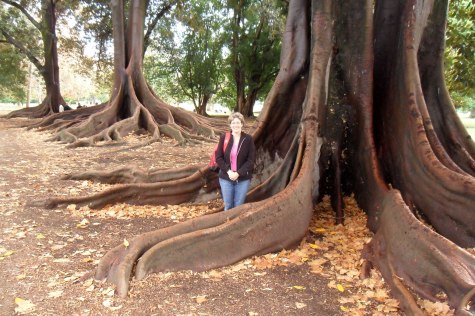 And finally it was time to leave Adelaide Zoo and head home. Now while there could possibly be an hilarious and witty caption for this photo which cleverly links the concepts of jeans, appearances and big buttresses, I can’t for the life of me think of what it would be.  So I’ll just say, “Doesn’t Ard look lovely?”

4 Responses to blog 39: In which I take you on a photo tour of my recent trip to Adelaide.