blog10: In which I throw a much needed life-line to fellow author Barry Jonsberg

A couple of years ago when I was resident Blogger at the State Library of Victoria’s Insideadog website, I did a post on my good friend and fellow writer Barry Jonsberg. I thought it might be an opportune time to recap on that and update it. (At this point the cynical amongst you will be muttering that I’m merely re-hashing old ideas because I haven’t got an original thought in my head. Yeah, well, you’re just the sort of people who probably poohoo-ed the Rapture as well!)

Anyway, many people would be aware of what a terrific writer Barry Jonsberg is, having produced wonderful books such as The Whole Business with Kiffo and the Pitbull, It’s Not All About You Calma, Dreamrider, Ironbark, Cassie etc.  (Incidentally Barry’s wife Nita has written excellent Teachers Notes for many of my own novels. She is also stunning, charming, witty and intelligent. What’s that thing they say about opposites attracting?)

But I digress. I first met Barry at a Reading Matters Conference in Melbourne. For both of us, it was our first event as authors. In fact Barry pointed out to a big audience at the conference that the two of us had a lot in common – we were both ex-English teachers, we’d both just written our first novel, we’d both been shortlisted for the CBCA award (I won’t mention who eventually won that because Barry’s still very touchy about it) and we were both of a similar age. He went on to tell the audience that we were so similar he thought he might have been in love with me! (Apparently he was joking. It just would’ve been nice if he’d told me that, so I didn’t waste all those days waiting by the phone for him to call. Men!)

But that’s all water under the carpet now and as I said at the start, I consider Barry a good friend. (He maintains that he considers me a ‘complete waste of space’, but I put that down to his wacky sense of humour.) Sadly however, in the last year or so, Barry has fallen on very tough times and subsequently his life has spiralled out of control. These days, he is  a broken shell of a man, reduced to wandering the streets of Darwin, getting what enjoyment he can by planking in the gutters at night and warming himself by fires fuelled by the pages of his novels.

And the shocking thing is, IT’S ALL MY FAULT! It came about like this:

You may recall that in the 2008 Melbourne Cup (aka the race that stops a nation) there was a horse running called ‘Bauer’. (The very observant amongst you will have noticed a startling similarity between this and my surname!) Well it turns out that when Barry Jonsberg saw that there was a Bauer in the Cup he took it as a clear and unmistakeable omen that the horse was destined for victory. In fact, such was Barry’s faith in the ‘Bauer brand’ that rumour has it, he put his house, his superannuation and the untold millions of dollars he’s earned from book royalties on Bauer to win!

It came second – not even by so much as a nose. (In fact if the horse had actually possessed what my wife quite hurtfully refers to as ‘the Bauer nose’ it would have romped it in.)

See below for proof. 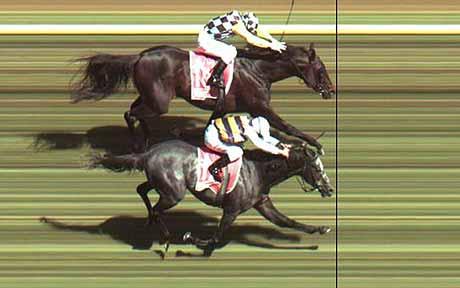 BAUER losing the Cup by a micro-nose.

Barry of course, as is his nature, took it very well. For the next month or two (until the Restraining Order kicked in) he sent me an endless stream of amusing, tongue-in-cheek emails and text messages questioning the legitimacy of my birth. Oh how I laughed! 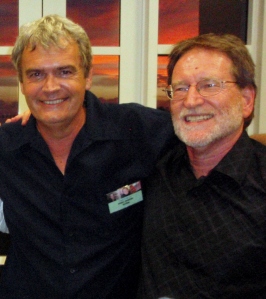 Barry Jonsberg bravely managing a smile in times of adversity.

Sadly, as I was chortling away, I was totally unaware that Barry’s own life was plunging into an awful pit of despair. But not any more! Through this blog, I want to lend Barry an Oprah-like helping hand and raise him back up into the light!

Barry Jonsberg has a new book out called Being Here. You should buy it and read it. It is brilliant and beautiful.  It will draw you in. It will make you think and wonder. It will touch your heart and mind. And if you are anything like me, it will cause you to say repeatedly during the reading, “Omg, I wish I’d written that.”

And if you doubt my judgement or feel I might be biased (after all there is a minor character called Michael Bauer in the story) then go here and read other glowing reviews and learn more about Barry and his books then it is probably healthy to know.

So there. It’s done. My debt is paid. I’m pretty sure I have saved Barry’s life and his marriage, as well as single-handedly resurrecting his faltering career. And don’t worry about writing to thank me Baz, it’s nothing – besides that Restraining Order still has two years to run.

ps Of course the other important reason for posting this story is to serve as a cautionary tale on the dangers of gambling. Remember, that what happened to Barry, could just as easily have happened to you! (Unless of course you were smart like I was back in 2008 and put $20 on Bauer to run a place and you won $130 . Yay me!!!!!!!!!!!!!!!)

This entry was posted in Uncategorized and tagged Barry Jonsberg, Being Here, Insideadog, Reading Matters. Bookmark the permalink.

4 Responses to blog10: In which I throw a much needed life-line to fellow author Barry Jonsberg