blog 5: In which I learn something about writers and stories. 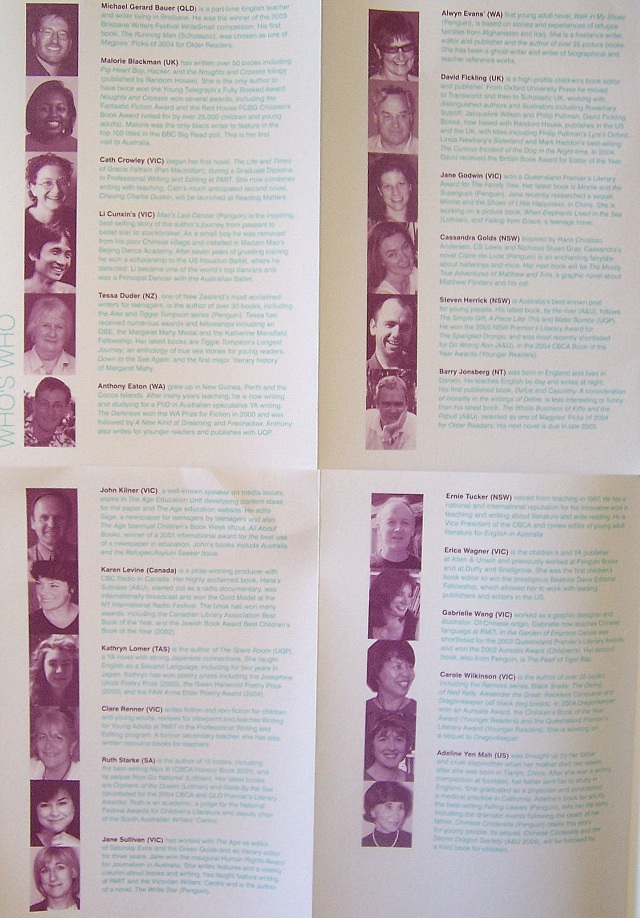 The first big thing I went to as a writer was a Reading Matters Conference at the State Library of Victory in 2005. I didn’t know any of the other ‘real writers’ attending so the night I checked in to the hotel in Melbourne where we were all staying, I decided to go down to the bar and see if I might bump into someone there. I did.

Kathryn Lomer a poet, who had just written her first YA novel The Spare Room recognised me from the program. She didn’t know anyone either and she’d had exactly the same ‘bump into someone at the bar’ idea as me. We bought some drinks and found a table to the side.

Pretty soon we noticed across the room a very animated group of 20 or so people gathered around some lounge chairs, laughing and waving their hands about and talking loudly. The writers! Kathryn took out her program and we checked. Even though the photos were small and we had to take into account that some writers might have submitted ‘young-ish’ images of themselves with maybe more hair and fewer wrinkles, it wasn’t too long before we had identified 3 or 4 ‘definites’ and a bunch of ‘probablies’.

I was quite happy to play ‘Identify the Writers’ all night but eventually Kathryn said:
This is silly. Why are we sitting here? We should just go over an introduce ourselves.

To which I replied:
Great idea! What don’t YOU do that while I go and get us some more drinks?

Anyway, after rolling her eyes in disgust and mumbling something about me, which involved the word pathetic, Kathryn heading off to the writers and I headed off for the bar. But when I started to make my way over with the drinks, Kath wasn’t with the writers. She was back out our little table sitting by herself. So I went over to find out what had happened.

Apparently she’d walked right into the middle of the group, introduced herself confidently with a big smile and said: You must all be writers down for the Reading Matters Conference.

What followed was a couple of seconds of silence interspersed with confused looks, before someone replied:Writers? No, we’re all from TELSTRA.

How I laughed when Kathryn told me that. Of course when we did eventually meet the other writers over the next few days, that story got a few airings, as it has done in other times and places over the years. And as it is doing again here in this blog.

I guess what I learnt is, whereas WRITERS may be hard to find, STORIES often have a strange and surprising habit of finding you.

PS: Kathryn Lomer’s most recent YA book is What now, Tilda B? She has also written novels and short fiction for adults such as The God in the Ink and Camera Obscura. Her second book of poetry Two Kinds of Silence won the 2007 Kenneth Slessor Poetry Prize in the NSW Premiers Literary Awards.

4 Responses to blog 5: In which I learn something about writers and stories.