blog 51: In which I launch a new COMPETITION!

Every now and then a COMPETITION is announced that is so stupendously, mind-blowingly and earth-shatteringly gargantuan that it can only be described as REALLY BIG!

But while you’re waiting and hoping and praying for a COMPETITION like that to come your way, why not enter mine?

Today I proudly launch the ISHMAEL AND RETURN OF THE DUGONGS SOUNDTRACK CD GIVEAWAY!

I have six Ishmael and the Return of the Dugongs Soundtrack CDs to give away. Yes SIX! That’s the numerical equivalent of one for every digit on your left hand PLUS one digit from your right hand! Or vice-versa!!!!!

“But Michael, what exactly is an Ishmael and the Return of the Dugongs Soundtrack CD?” I don’t hear you ask since I’m sitting at my computer and you’re probably miles and miles away.

Well these CDs are not commercially available anywhere, so it’s fair to say that they are rare collectors items. (Particularly if you are the sort of rare collector who collects things that normal people rarely collect.)

The CDs feature the 9 Dugongs tracks whose lyrics are found in the book. All the songs were recorded by the Hamburg band GONE FISHIN’ for the German Audio edition of Ishmael and the Return of the Dugongs released by the wonderful HOERCOMPANY. Even though the CD was made in Germany, all the tracks are sung in ENGLISH. 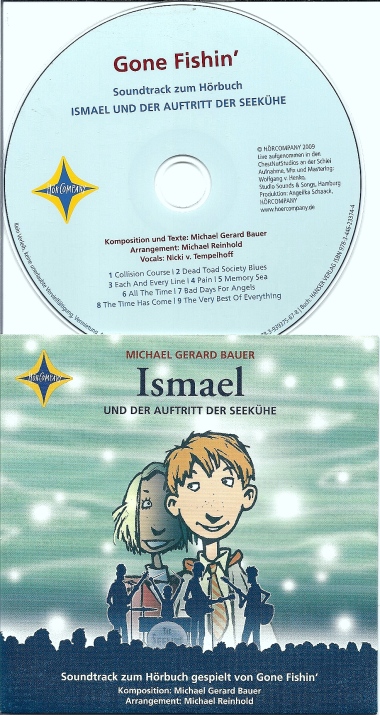 A small quantity of CDs featuring just the songs was made mainly for the Band and the Publishers, their families and friends and other interested parties, including me. The songs aren’t full versions. They cover only the lyrics used in the novel to introduce the nine sections of the story. (I wrote additional lyrics when Gone Fishin’ and I performed the songs together at the White Ravens Festival in Munich in 2010.)

You can sample one of the tracks from the CD here: The Very Best of Everything.

“So Michael, what do we have to do to win a CD?” I don’t hear you ask again for the same reasons I have covered earlier if you were paying attention.

Well I’ve kept it very simple because after  all, I know my readers. (Come on, I’m just kidding!)

Anyway, because I figure only the people who’ve read and liked THE ISHMAEL TRILOGY will be vaguely interested in entering this competition in the first place, all you have to do to go into the draw is to:

(b) Just include in your post, any one of the 48 CHAPTER TITLES from Ishmael and the Return of the Dugongs. (Try to choose a chapter title that appeals to you for some reason so we have a bit of variety. But it won’t matter if you happen to choose the same one as someone else. However if everyone just happens to pick the same title as the first person who posts, I reserve the right to throw up my hands in disgust and refuse to talk to any of you ever again!)

All entries will go into a draw next week sometime, but whoever posts the very first entry I receive will definitely win a CD.*

* NB: Even though ‘chance plays almost every part in this competition’, the judge’s decision will still be final and I will accept no responsibility whatsoever for anything that’s ever happened since the dawn of time till the end of civilisation as we now know it even if this whole contest turns out to be an elaborate Nigerian internet scam and you all end up bitter, bankrupt and on the streets as a result of your voluntary and obviously foolish participation.

Finally a big thanks and best wishes go to the lovely Andrea (below left) and Angelika (below right) of Horcompany for their wonderful German Audio versions of all my books, for making my collaboration with Gone Fishin’ possible and for supplying the Dugongs Soundtrack CDs for the competition.

This entry was posted in Uncategorized and tagged Gone Fishin', Hoercompany, Ishmael and the Return of the Dugongs, The Ishmael Triolgy, White Ravens Festival. Bookmark the permalink.

22 Responses to blog 51: In which I launch a new COMPETITION!